The mechanism of the Smoker is rather simple.

The train is driven by a single spring driven barrel. Attached to the barrel is a series of cams that control the motions of the Smoker – the movement of the head, the opening and closing of the mouth, and the lifting of the hands. The barrel also drives an intermediate wheel and fly – controlling the speed of the motions, the blinking of the eyes, and the inhalation and exhalation of the smoke into the bellows.

The mechanism had been worked on before, as someone scratched words onto the components detailing which cam corresponds to which motion. This is not something that as I conservator I would remove – but would preserve as part of the object’s past. It is also something I strongly discourage. A good conservator should not leave their own fingerprints (literally and figuratively), but preserve those of the past.* 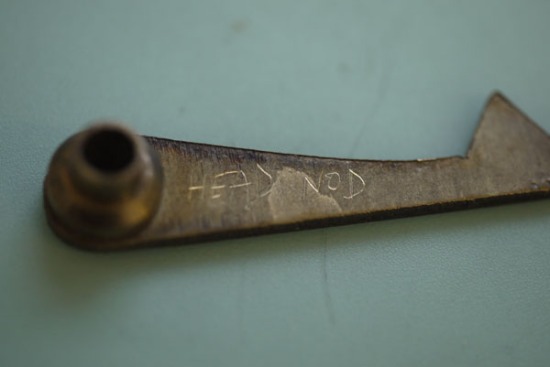 Traces of the past

The largest problem with smoking automata, are the problems that arise with the bellows system and not so much with the mechanism. The bellows coverings are the first thing to break down, as they are made of organic materials that are directly in contact with cigarette smoke – a highly toxic and corrosive substance.

This is a serious issue for this type of automaton as every time the bellows system needs repair, the figure must be undressed and the paper mache body opened. Collateral damage to these materials is inevitable when the mechanism is in need of repair. This was the focus of my MA studies. I wanted to identify a modern material that could stand up to long term exposure to smoke and its effects, while still serving the functions of a bellows covering material.

The functions of the bellows valve system must be checked for proper action before the bellows frame is recovered. 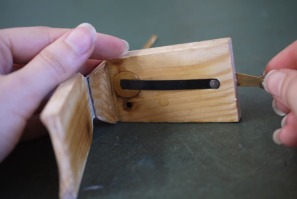 The valve lever rivet must be free enough on the frame to allow the blued steel spring to move the brass valve disc from the inhalation to the exhalation pipe, but be tight enough to keep the disc in tension against the frame so it doesn’t drop off. 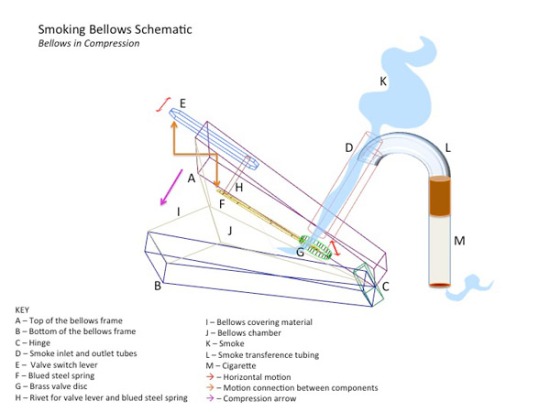 After preliminary tests were carried out for my MA, I recovered the bellows with Tyvek coated in a pH neutral acrylic medium to ensure airtightness. I talk about recovering bellows here. This material proved to be the most reliable and stable over time.  The tubing for the smoke transference was replaced with a material used in the medical industry, as the original tubing of volcanized rubber had severely degraded, becoming brittle and fractured.

After the bellows system was restored, all the proper checks were carried out, and the mechanism was overhauled the Smoker was ready for its first cigarette in a long time. You will be invited to join him in a subsequent post.

Mechanism and bellows after conservation

*not in all cases – for example a carriage clock where the plates are visible and are beautifully bright, but are etched with a dark fingerprint – this is something that would require consideration and likely removal.

© Brittany Nicole Cox and Memoria Technica, 2012. Unauthorized use and/or duplication of this material without express and written permission from this blog’s author and/or owner is strictly prohibited. Excerpts and links may be used, provided that full and clear credit is given to Brittany Nicole Cox and www.mechanicalcurios.com with appropriate and specific direction to the original content with a link.